It’s real! As of this June 3rd, Multiuniversum is officially released.

Off to a bumpy start, my flight was delayed so I only got to the event after most of it had closed for the day, leaving only the open play rooms. I was trying to find Board & Dice (B&D) to see how the final production copies had turned out. They kept me up to date with photos and videos, but I hadn’t seen a production copy in person.

Before I found them I noticed a family sitting at a table with a familiar box. They had done the setup and were reading through the rulebook, getting ready to play the game I had been working on for years. I wanted to say hello, maybe even teach them how to play but then it dawned on me that I have no idea what the etiquette for this type of situation was.

I paced around the table, got my phone out to take a photo and realized I had no signal. How can I arrange to meet if we can’t communicate? I went outside.

After meeting B&D and showing them around the open play rooms, we noticed the family had finished the game and were adding up the final scores. This time we said hi, talked to them for a bit and they asked me to sign their copy!

Not just any copy. The first production copy I ever saw.

It was pretty unbelievable.

We kept playing it most of the night, and it was a lot of fun seeing players look through the crazy universe illustrations for the first time. The angry gummy bear was clearly the most popular one.

When the players recognized the game I wondered where they had seen it before, and the answer was unanimous: Rahdo’s runthrough. Thank you Rahdo!

I spent the most part of the next two days demoing the game, teaching and playing it with everyone who popped by the booth. The response was very positive. Most players bought a copy after the game was over and some even came back for an autograph!

Most people just asked for a signature, others asked for a note and one player even asked for a thematically-appropriate joke. Cheers to Robin David, who saw that picture of me signing a copy and brought me a much better pen from Ireland the next day!

During the night I saw the game being played all over the open play rooms, an amazing feeling after working on it for so long. 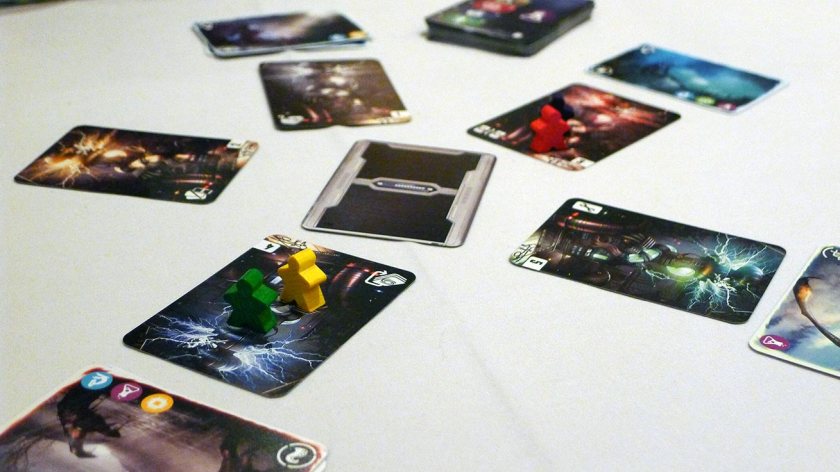 It seems word got around and by the end of Sunday it sold out!

Thank you everyone! But especially: 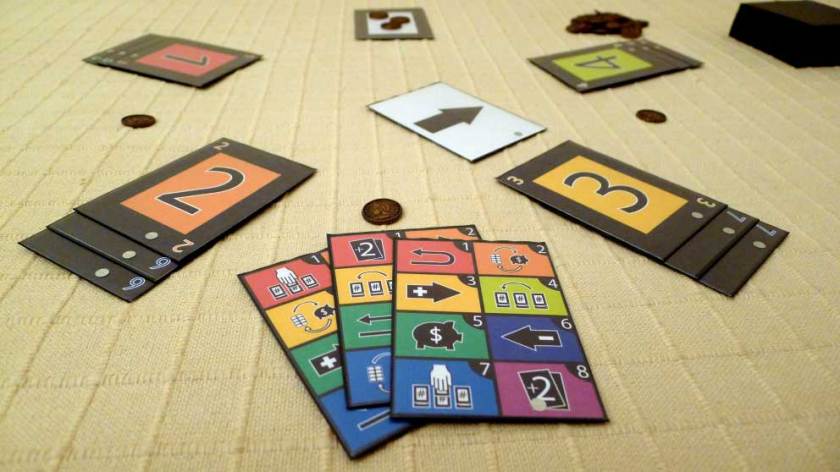 The tips from the latest Arcádia meeting were spot-on. I took their suggestions, adapted them to the game and playtested them at home to save time. I made some changes to the icons and cards and added the coin tokens.

The Friday meeting was great. Every game got played. I thought there wouldn’t be time for mine because it was  getting so late but it got played at around 2am and everyone had a good time!

Wrote some notes down, tweaked some elements and now I feel like it’s done. I don’t see a single thing I want to change.

What’s next? Why, I’d like to publish it of course!

First, it has colors now. Developing the icons in black and white helped to make them readable so players don’t just rely on the colors. After that was complete it was fairly quick to bring colors in. All the numbers are still there though, making it playable by the colorblind.

This experience taught me a lot about iconography and preparing editable files for inevitable changes in the future.

Second, Advance Mode has become standard because it’s much more rewarding. Players feel like they have a certain degree of control over the game’s more random parts.

Third, the new players at the latest Arcádia meeting said they wanted some more meaningful choices during the course of the game. They felt like their whole turn was useless if they didn’t score any new points. They also suggested adding coins to the game, which would be easy to get but aren’t worth that many points. Still, it is another way to increase your score if you don’t can’t deposit cards this turn.

I got some tokens, tried the game with these changes against myself. The game was so balanced that every test game ended up a tie. I started taking more thorough notes while playtesting to see which actions are the most useful.

Ended up with a new victory condition that makes the game much easier to learn, more tactical and, hopefully, fun! I’ll keep testing and bring back results. 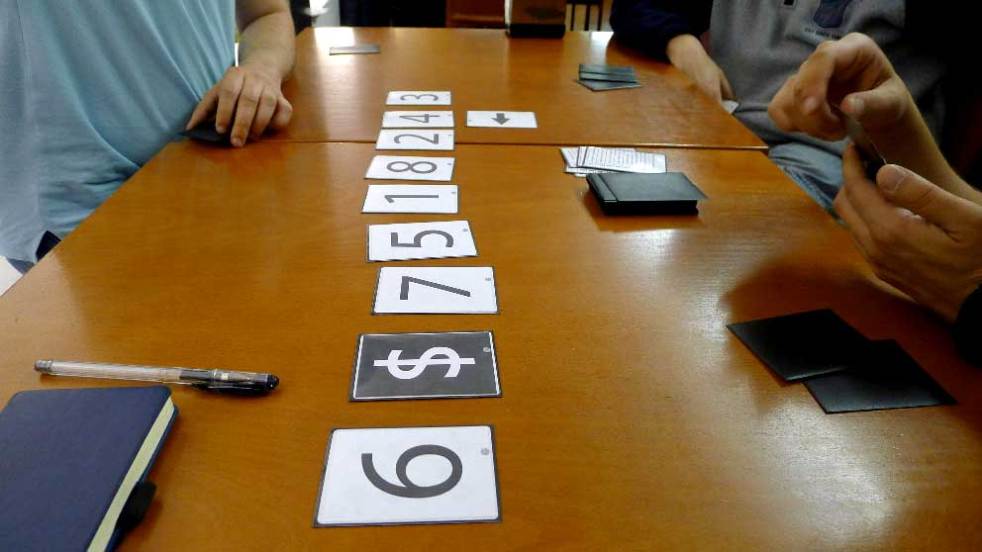 Carousel is doing great! The main reason I haven’t been posting about is because I have been working on it so much. I’ll try to resume what’s been going on:

Prototype 3: At the Arcadia meeting some unexpected big flaws showed up, which brought the game to an endless loop. The biggest problem was that getting all the factors right so you could play a number card was so unlikely that nobody was able to do it. Most of the numbers that can get you points show up as the game progresses so the game was locked at the very beginning.

This called for a major redesign.

Prototype 4: This time I went back and changed the number cards. Now there are only 8 single number cards which you can play at any time. There’s a new action that lets you take a number from the table to your hand, which allows you to control the time flow. Other new actions allow you to play the previous number or refresh your hand.

There are now five more action cards so the total is 54, and the actions were moved around so they appear the same number of times per number. Games took longer than expected and I saw some situations where people won almost accidentally. I certainly don’t want that!

The main flaw seemed to be the lack of purpose in player’s actions. Sure, you want to get five cards in the bank but you don’t know what numbers will give you that. You could be moving the arrow around so your opponent doesn’t get to the highest numbers but they may have a card that scores them a point in the lower ones so what you did was basically random.

I know just how I can fix that.

Prototype 5 (the one you see in the picture above): I took away the action that scores points from the action cards! Now the way to do so is to get to the “$” card on the timeline. This card is on the table tight from the start and provides a much clearer goal to everyone. You want to get there but you don’t want the other players to to so. Also, it’s easier to steal cards from the bank than to get there, which allows for some interesting turncoat player interaction. The players liked that so much they wanted a few more “$”.

This sounded cool but they couldn’t be permanent just like the initial “$”. These are one-time uses. You can take a number from the table to your hand, leaving the “$” where that number was. The first player to get them gets to store it in the bank. Brought four of those in, took four action cards away to compensate.

There was an action which allowed you to trade your hand with an opponent’s. That brought an interesting dynamic element: you could play your actions so you get one card only, use that action and get a whole new hand. The player gets your (empty) hand and in their turn they won’t be able to play. As a designer I certainly found that interesting, but it was a frustrating thing to suffer while playing.

Nuno Carreira liked the game mechanics so much that he suggested something new: Advanced Mode. Don’t let the name scare you off, the only thing that changes in the rules is the fact than you can play three cards per turn instead of just one! This allows you to control the random aspect of the game, making it a lot more satisfying and tactical. It can be played without changing anything about the current cards!

Prototype 6: These ones are intended for Ludopolis. I rearranged the action spreads for 40 cards and made two new versions. One looks just like the previous one but with more balanced actions and a slight change in wording.

The other looks entirely different, with a whole new layout and icons instead of text. This new version is language independent and makes it easier to show the other players across the table the action you’re using. I can’t wait to try it.

Also, Carousel now has a Boardgamegeek page which you can access by clicking here.

Recently, the “Arcádia Lusitana de Criadores de Boardgames” was created. The main goal is to share information, resources, provide playtesting and feedback for portuguese boardgame projects. Currently the main discussion platform is facebook, along with regular meetings. Seems there are quite a few more Lisbon-based designers than I thought!

In the first meeting Vital Lacerda tried out my game. He seemed to like it and suggested I switch the placement of the minimum bid silhouettes with the action effects to make it more intuitive. I don’t know how I didn’t think of that before. I laughed and wrote it down right away. This weekend I had the chance to test it and he was absolutely right – it does make it easier to teach and play.

The second meeting is coming up! It will be on the 20th of February and you can find all the details here.

Also, Last week I read Raph Koster’s “Theory of Fun”. If you’re interested in making games I advise you to check it out. The first half is about the human brain and how we define what’s fun for us. The second half points a possible path games should take for them to be seriously respected as an art form.