Here’s a recap of news that have been shared in other social media over the last months:

SUPERHOT: The Card Game has been released in China thanks to Super Banana Games! It’s amazing to see my games travelling to countries where I’ve never been.

Multiuniversum: Project Cthulhu was reprinted! When the Kickstarter launched it was meant to be exclusive, but it sold out rather quickly due to its great reviews. You no longer have to go insane looking for the last copies, just check Board & Dice’s shop! 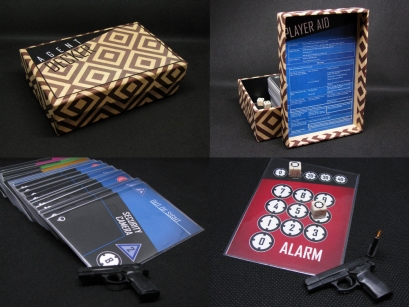 One of my favorite things about print and play is that it allows (and even motivates) the players to get creative and if they love the game some players take their copy to the next level. Look at BGG user BulldogBite’s awesome Agent Decker build!

As for the progression of the development and design perspective, we’re almost there, and we can see a bright light there at the end of the tunnel. On that note, we’re working hard with David Decker while Zoe and Hideaki are waiting for their turn since we want to have a solid base game before inviting other agents on the mission.

Since working on a game with multiple paths is challenging and we had to develop our own tools to be able to work together from different countries. One tool allows us to access an editable version of the cards at any time, without depending on software licenses and the other allows us to save the game. Saving allows us to “load” the game from that point instead of having to restart every time, and helps us see which cards we picked on our most successful runs.

Now let’s get back to work!