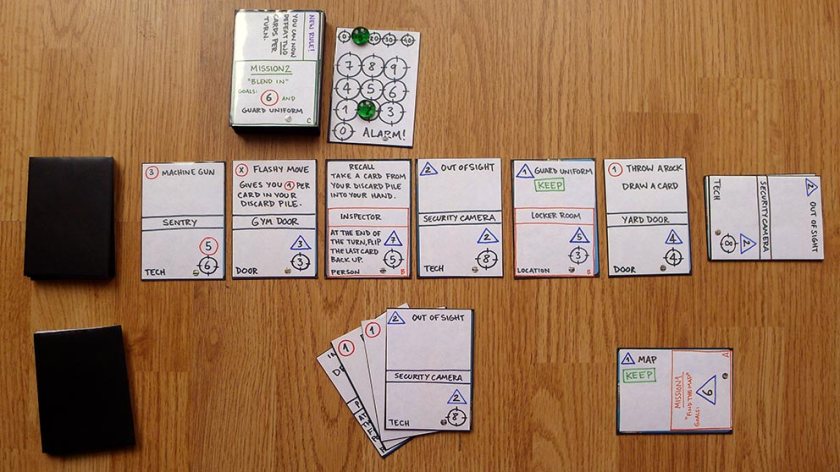 After some good feedback and struggling with serious balancing issues I couldn’t really solve, I decided the best thing would be to go back to the drawing board, so this week I restarted the game.

The biggest change is the mission sequence. Initially there was none of that. The player would draw a goal to complete during that mission, or even raise the difficulty by drawing more than one. I liked that concept because it would add replayability without adding new cards. If you felt you were getting better at the game you could create new challenges for yourself.

All the “Obstacle cards” (the ones you can buy) were shuffled in a single deck and six of them were placed in the center of the table. Every turn some cards leave the line and new ones come in. That means some cards need to be “affordable” at the start of the game and a lot of them need to be more expensive, because later in the game your deck is so much better.

The thing is, the cheap cards might not show up at the start, which can lead to a few really frustrating turns.

Games like Ascension or Star Realms solve this by having static piles of “upgrade” cards which you can purchase independently from the central market. I had those at the start as well, but they never felt “right” to me because of the theme. You are walking past stuff in the enemy complex, so how come these things were always at an arm’s reach?

Then, there was a really good surprise! The players always wanted to keep playing after completing the first mission. I started thinking how to achieve this without becoming monotonous and that lead to…

Next up, a digital version so you can try it out!