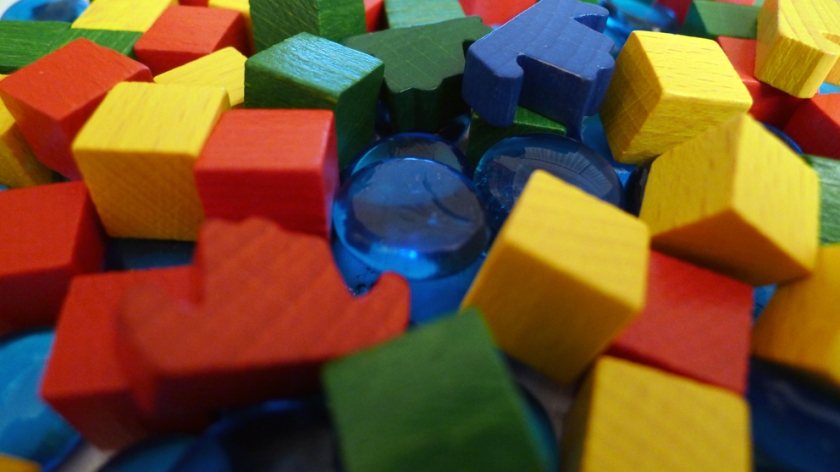 In the last post I was talking about ties in other blind bidding games. This post is mostly about dealing with that, along with some notes on avoiding band-aid game design.

When I was researching this game type I noticed that a lot of these games cancel each other out. After playing a couple I found this to be pretty frustrating and I thought that avoiding that could be a cool feature for my game.

In the most recent version there is no tie in which the bids are canceled.

To achieve that I defined that the player that has sunk the most wins ties. This could turn some nasty situations around, and sinking faster would be a viable strategy in the beginning of the game. At least one player per game so far does this willingly. They let it sink, get some resources and go back up before the other players even thought about fighting for that action.

Their only worries are outbidding the other players and not sinking.

This creates a weird situation where the two sunken boats can be in the same spot on the board. Who wins then? I started experimenting with placing the boats in line inside board spots, allowing for the player who’s been there the longest to stay in front of that line. There, solved – or so I thought.

I taught the game to a couple of people who don’t regularly play games and they found these rules hard to memorize. That just means this made no sense to them. But…I was just trying to give everyone a change to progress even if there is a tie!

In an attempt to simplify these situations and have a unique rule for solving ties, I thought back at those other games in which ties cancel each other out. This can be frustrating for the players, but it gives each bid a greater importance. Now, instead of just thinking about outbidding the other players you really have to consider that they might be betting on the same action. Having that action cancelled is bad for both as all resource tokens spent in the action will be discarded just as if they’ve been used. This will most likely promote some more variety in the actions the players will be doing because each of them will have a good reason to play in an unpredictable way – and give some extra chance to the losing players because (at least) two bigshots will waste a turn and lose some resources at the same time.

Now I get why other designers chose this.

This still gives losing players some time, brings up a new layer to the mind game and is a lot more elegant. I’ll be experimenting with that in the next playtest.