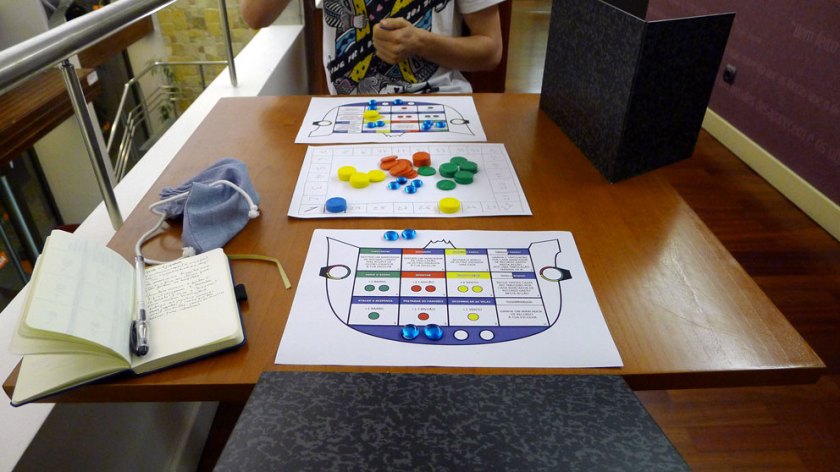 This third playtest was by far the most successful one, but it started on a road bump. I got there and realized I didn’t print the new center board (the square one with all the numbers) and had to improvise one on the spot. It worked well enough, nobody complained. It may actually have lowered expectations from new players and eased them in.

At the start there weren’t that many people available for a game so I tried a two-player game for the first time. I didn’t really know if it was balanced or not. Turns out the game is a lot faster with only two players, but it’s hard to bring back dead crew members because the winning player can use the two cannons to attack, and score most of the time. I’ll test it out more and fix some of the rules for a fair two-player game.

The four player game was by far the most balanced yet and most fun yet. The new rules made it a lot more interesting, because going “all in” puts you in great risk. We cut cut the board short at 15 because it was really late, but that made the game more intense and I was very surprise when it brought a crowd in to watch the final turns.

More than that, the people who were watching were mainly people who hadn’t played it before and were curious about the rules. A couple players wanted to know what had changed since last time because both boards looked different.

It’s really getting there, and it will only get one minor wording tweak for the next playtest.

Big thank you to all the playtesters, you’re shaping my original idea into a good game!